The Los Angeles riots in 1992 highlighted the need for a radically different form of policing. Those events would eventually lead to the LA Police Commission and Robert Wasserman's Bill of Rights, which guarantees citizens of their rights to a civil trial and public access to the justice system. While the US has evolved different outcomes on how police should operate, Los Angeles is still the country’s leading example of a predominately peaceful city with a responsive law-enforcement apparatus dedicated to the public being its ultimate customer.

Consisting almost entirely of clips from other films with narration, the film was not initially released commercially as it was only seen in screenings presented by Andersen, occasional presentations at American Cinematheque and copies distributed via filesharing and other person-to-person methods. In 2014, it was announced that the film would finally be released officially by Cinema Guild.

Of the cities in the world, few are depicted in and mythologized more in film and television than the city of Los Angeles. In this documentary, Thom Andersen examines in detail the ways the city has been depicted, both when it is meant to be anonymous and when itself is the focus. Along the way, he illustrates his concerns of how the real city and its people are misrepresented and distorted through the prism of popular film culture. Furthermore, he also chronicles the real stories of the city's modern history behind the notorious accounts of the great conspiracies that ravaged his city that reveal a more open and yet darker past than the casual viewer would suspect.Andersen began the project in 1999 in the form of lectures at CalArts, partly as a critical response to L.A. Confidential. The resulting vid-shot work is a dynamically edited and endlessly watchable intellectual entertainment composed largely of clips from movies that have embrace cinema's natural pop-culture tendencies as well as textual sources such as French philosopher-critic Gilles Deleuze. (Source: www.viennale.at) 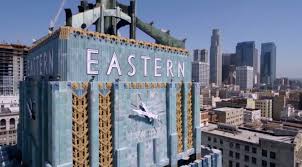 All I ever did was drive the familiar loop of surface streets I knew, smoking cigarettes, blasting the heat with the windows down on winter nights. I drove from the Starbucks to the Coffee Bean where Perez Hilton wrote his celebrity gossip blog, to the other Starbucks and the other Coffee Bean where the girls in my class smoked Parliaments with homeless Vietnam vets as part of their Method acting research for the school play. We ate frozen yogurt for lunch and also for dinner and smoked and drove until we had to go home.

Whenever anyone condemns the cultural vacuity of Los Angeles, defenders bring up the famous German émigrés who moved there during the war: Adorno, Horkheimer, Mann, Brecht, Neutra, Lang, Schoenberg. In The Rest Is Noise, the music critic Alex Ross describes a scene between Schoenberg and the wife of the novelist Lion Feuchtwanger at the Brentwood Country Mart, a grocery store with an outdoor fire pit where my parents used to take my sister and me to get fried chicken. Marta Feuchtwanger is handling some grapefruit when she sees the composer, wild-eyed, coming at her. “Lies, Frau Marta, lies!” he screams. “You have to know, I never had syphilis!” Since upgraded to an upscale shabby-chic boutique complex, where the General Store sells bubble mailers and Lacoste polo shirts, the Country Mart is now home to the Goop pop-up store, a physical-reality version of Gwyneth Paltrow’s lifestyle website. (Source: www.nplusonemag.com)