Bonnie Aarons (born June 3, 1979) is an American Actress and Writer from Los Angeles, California. She is popular for appearing as Valak in “Conjuring 2” and “The Nun” horror movies. Furthermore, the 39-year-old actress came into the limelight when appeared “Mulholland Drive” as Bum.

Mike looks at the phone and then quickly away. There’s an image on the screen of Bonnie Aarons, co-star of the new horror film The Conjuring 2. The movie is already in its second weekend, and they have plans to join its box office that evening; it’s hovering around $71 million domestic, 23 days away from the coveted $100 million mark, which Finding Dory passed the day before. Aarons plays the main villain in the film—a spooky nun—and her gaze is terrifying, in and out of costume, skin wet and stretched into crooked, immortal disgust. The picture on Keaton’s phone is just a random paparazzi shot but it captures them nonetheless, dragging them deep into its shadow. Mike lays a $20 bill on the counter and gets up to leave, “Forget the buffalo sauce.”

Bonnie Aarons is an American actress and writer who was born on 3 June 1979 in Los Angeles, California, United States. She is famously known for her roles as Baroness Joy von Troken in The Princess Diaries and its sequel and The Nun (2018). She has also played small roles in several horror movies, such as Drag Me to Hell, I Know Who Killed Me(2007), Mulholland Drive, and The Conjuring 2,

At this point in the interview, she finally turned to face them, and it was indeed Bonnie Aarons. As soon as her chair swiveled in their direction, Keaton and Mike looked at one another, screamed, and got up running, out the door of the hotel, out of the parking lot, out of Hollywood and Los Angeles and California altogether.

I knew I really wanted to make a monster movie that felt unique and special. Very character-driven, with humor and scares like the films that inspired me growing up, but with a modern edge to it. I put a lot of my own life experiences into the characters, and it's fun to watch them navigate such terror throughout the film. I also really wanted to design a unique monster that could make an insane and scary Halloween costume or just a mask for your everyday wear! The process of shooting Frank was intense but also one of the most fun times I've ever had. I got to play the lead character, Ruby, who is running through the woods at night and constantly being attacked. Every time we'd cut, it was laughing and smiling; how it should be when you're making a film this fun. I also got to work with such incredible actors like Bonnie Aarons, Azure Parsons, Lyndsi LaRose, Rachel Brunner, and Adam Busch. There seriously wasn't a weak performance. It feels great to know people will see this film and at the very least say, 'that is a cool freaking monster, an original story, and holy hell, the acting was good.' I just hope everybody laughs, is scared, and enjoys the ride Frank takes you on because damn, we had fun! 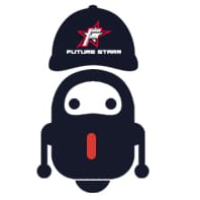